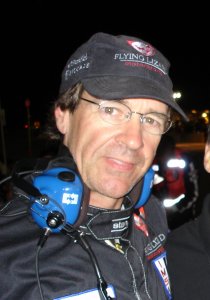 On this week’s episode of Speed Secrets Podcast, Craig Watkins sits down to discuss how he became a race car engineer, how the Flying Lizards race team came about, the process of engineering and tuning a car’s handling, and the right questions to ask to figure out what your car needs. He also dishes about what it’s like to work with drivers such as Johannes van Overbeek, Patrick Long, Jörg Bermeister, Timo Bernhard, and other factory Porsche drivers.

Craig’s Speed Secret: Use a tire gauge and notebook, then data acquisition and video.

Craig Watkins is considered one of the top Porsche race engineers in the world. Watkins has been engineering and racing cars since he was a teenager. He began off-road racing in 1976 and competed in a Class10 car in the SCORE series from 1983 to 1990. Racing with Greg Aronson, Watkins won nearly every major off-road race including the Parker Dam 400, the Baja 1000 and the Frontier 500; he won the SCORE points championship in 1987. In the early 90’s Watkins began racing in local Porsche club events, where he met driver Johannes van Overbeek who would introduce him to World Challenge GT racing and the Lizards. Watkins has been Flying Lizard chief engineer since its inception in 2003.