Q: Any tips for dealing with motion sickness while driving? 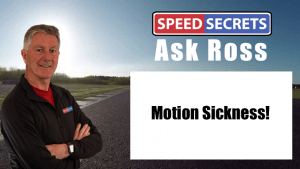 Q: “At the age of 47, I’ve just gotten into endurance racing (24 hours of Lemons). So far, I’m quickest on the team over a single lap, but my stint time is among the shortest because I get car sick while driving. This first happened at an open lapping day while riding passenger in a friend’s car. I got sick almost immediately. That was the first time I’d had motion sickness of any kind in decades. Later that day, it happened while I was driving for the first time ever. Fast forward to the race and I was only able to push to a 90-minute stint, but not longer. During that 90 minutes I had the patches on behind my ears, the pressure point bands on my wrists, and had taken some ginger prior to getting in the car. I wasn’t going to do Dramamine or anything like that for fear of drowsiness and other side effects. Is this common? Any thoughts or tips on how I can deal with this in the future?”

Beyond what you’ve already done, here are a few things you might try/add:

I recommend that you combine all of these, where you can. Focusing on looking further ahead, while centering (tongue touching the roof of your mouth) and breathing are easy to combine, and I suspect that will help. If you were able to work in a routine of building up a tolerance while doing all of these, too, that would help even more.

For sure, the worst thing you can do is try to drive through motion sickness, because it only gets worse and reinforces the belief and mental programming that this is going to happen. I really think that if you focus on your vision, centering, and breathing, it will help.