Q: As a newbie to racing, how do I respond to being brake checked? 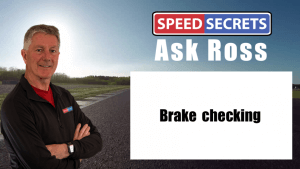 Q: “I’m a relative newbie who made the jump from HPDE to racing and experienced something weird at my last race. The car in front of me brake checked me on the main straightaway. I was tucked in tight and drafting him. He did it again in a race the next day. We were both driving slow momentum cars. His car was slightly faster. Is this something I should expect to see from other racers in the future? It felt dirty and dangerous. Maybe I’m just a newbie and it’s standard stuff.”

A: Two things come to mind when thinking about your question:

First, it might be a driver playing a dirty trick, trying to unnerve you and get you to back off. That’s not something I’m a big fan of….

Second, some drivers will tap their brakes slightly on the straightaway approaching a corner to ensure the brake pedal is solid. There is something that happens at times called “pad knock back” (excuse me if you already know this). The front or rear wheel hubs (stub axle to upright) can flex a little bit, and this causes the brake rotor to “wobble” a tiny bit; that can push the brake pads back from the rotor, so when the driver initially applies the brakes, the pedal has to travel further than normal to take up the extra travel for the pads to move back out against the rotors. Again, these movements are small, but can make the brake pedal travel an extra inch or so, which is not a very comforting feeling when approaching a corner at high speed.

FYI – the pad knock back may be worse at tracks where the exit curbs are used more, as that can cause more flex in the hubs.

So, it’s possible that the other driver was not trying to be dirty by brake checking you, but just giving the brake pedal a little “pump up” to ensure they had a firm pedal in the brake zone. To you, all you see is the brake lights coming on, and that can be unnerving. If the driver has just been pumping up the brakes, it should have been enough to get the brake lights to come on, but not enough to really make their car slow much. Judging that can be tricky – especially when you’re following closely. It’s not unusual to see the brake lights of a car ahead come on briefly on the straight for this reason, as some drivers like to tap the pedal before the brake zone to give them confidence the pedal will feel solid.

As you gain more experience, you’ll get better at determining when a driver is playing dirty tricks, and when they’re just giving the brake pedal a tap or two or three to make sure the pedal is firm. You judge that mostly by whether there is much or any deceleration of that car. If there is, it’s likely the tricks; if not, then it’s pumping the pedal up.

If you feel that a driver is really brake checking you, I would suggest having a private and calm conversation with the race officials, just to make them aware of it. That way, they can either talk to the driver, or at least, know that this is happening in case of it causing an incident. I would approach it from a “Just want you to be aware of this situation…” perspective, rather than a complaint. If you have an in-car camera that shows this, even better.