Q: Can you tell me about the Garmin Catalyst?

Q: “I’ve recently heard a lot about the Garmin Catalyst. Can you tell me about it – what it does, and can it help me?”

A: First, I was involved as a consultant during the development of the Garmin Catalyst, and yet, I’m not an expert on every little detail of what it can do. In fact, I’m still learning things about it that are pleasantly surprising me. Oh, and I don’t make a single penny off the sales of it. But I do think drivers need to know about it – I love to see drivers improve, and there’s not another tool available that works as well as the Catalyst. 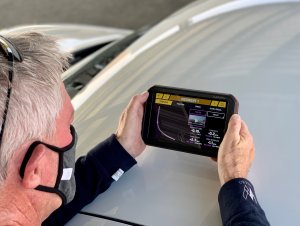 The first thing I’d say is that you have to look at it differently than “another data system.” To me, it’s a new category of product to help drivers – it helps you optimize your driving. Current data systems were originally developed by engineers, for engineers, and focused on the car’s performance. From there, drivers learned to use them in a way to help them with their driving. But if you’ve ever found yourself without enough time to download and analyze the data (the squiggly lines on a laptop screen) to figure out how you can improve your driving in the next session, then you know what I’m talking about. The Catalyst was developed by drivers/engineers, for drivers, and it’s solely focused on helping drivers improve (and by the way, there is usually more performance to be gained in the driver than there is in the car). This is the simplest tool to help you improve your driving performance.

To me, the three best things about the Catalyst are the real-time coaching cues, the optimal lap video, and the opportunities it identifies. Let me talk about each.

Other than the predictive lap timer, data systems don’t provide any real time feedback (and even that doesn’t identify what you did to go faster or slower). Therefore, you have to wait until after the track session to learn what you did, and how you can improve. The Catalyst provides audio cues while you’re driving, such as “brake lighter,” “turn in earlier,” and even “new best” when you’ve improved. Yes, beyond telling you what to do, it provides positive, confirming feedback to let you know when and where you have improved. The predictive lap timer is also there, but it uses colors to help you know whether you’ve improved, beyond just numbers. As a coach, the immediate, real-time feedback is the most important factor to help a driver optimize their driving – and the Catalyst provides that.

I should point out that the Catalyst will never tell you to do something that you can’t. In fact, everything it’s learned about your driving, it’s learned from you, from what you’ve already done. But it pieces the minor inconsistencies of your driving together in a way that determines whether it can be done again, and then gives you that feedback.

Does the coaching feedback work? Yes! When I first used the Catalyst, I had spent two full days lapping a track, and was driving very close to what I felt was the limit. If you’d asked me if I could go faster, I’d probably say that I might have a tenth or two left in me if I pushed harder. At that point, I relied on the Catalyst, and did what it told me to do. The result? I was 0.9 seconds faster. Since then I’ve seen it work like this for many drivers.

The optimal lap video is really cool. It takes the video from the various best segments of the track that you’ve driven over the course of a number of laps, and “stitches” the video together to form a complete lap. Now, you can sit down after a track session and watch a video of you doing your best, driving your optimal lap. This is hugely valuable as you visualize going back on track to improve for the next session.

Also, after you’re back in the paddock, the Catalyst will provide you with three “opportunities.” It has learned from your past session(s) where you can make the biggest improvements in shaving time off your best lap time. It prioritizes these opportunities by where you can make the biggest lap time gain, and you’ll be able to see whether it’s a cornering line change, or where and how you’re braking or accelerating. And again, you’ll be able see what you’ve done on the video. I’d say that within 5 or 10 minutes at most, you will have your plan for what to work on the next time you go on track. The opportunities are very simple to review and read.

Just those three things make the Garmin Catalyst a game-changer, but here are a few other things to know….

The first time I installed it in a car, it took me about five minutes from the time I opened the box to when it was ready to use on the track. And I barely looked at the instruction booklet that came with it. It’s that intuitive.

You don’t need a laptop or tablet, cables to download the data, or a separate video camera with the Catalyst. It’s all included, and you do all of your reviewing of video and data on the unit itself. Yes, if you want, you can take the SD card out and download the video (so you can show off your amazing abilities on social media!!), but keep in mind that the only way to review data and video together is on the device itself.

Oh, there’s another thing that I really love about the Catalyst. It’s introduced a new metric to measure your driving improvement. Typically, we’ve had one metric – lap time. But the Catalyst provides a couple of measurements of your consistency, in variability ratings. So, even if you end up turning the same lap time as you have in the past, you have an easy-to-see measurement of your consistency. If your best lap time is the same, but you’re more consistent, you’ve improved your driving. And we all know that we need to get more consistent with a lap time before we can push to go even faster.

I’ve had a few people ask if it’s going to make in-car instructors and coaches obsolete, and the answer is a definite “no.” But it’s a tool that instructors and coaches can use to supplement what they’re doing. In the High Performance Driver Education (HPDE) world, where student/drivers are rated as they progress from novices to intermediates to advanced drivers, there’s typically a point where a driver is “signed off to solo” – to drive without an in-car instructor. But, for most HPDE organizations, this is a bit like an on-off switch – the driver has instruction (on), and then doesn’t (off). What the Catalyst can do is provide more of a transition from having an instructor to not having one. That makes for a much safer and better learning experience for the student/driver. And as a professional coach, I’ll be using the Catalyst with drivers I work with. Why not, right? If it helps me help my drivers, it’s best for everyone.

Having said that, something the Catalyst cannot do is look a driver in the eye and sense whether they’re confident or not – even scared to push harder to go faster. And that’s something instructors and coaches do that will keep many of us busy for years to come.

To see a company with the expertise, experience, and reputation like Garmin has come into our sport is exciting. As you may or may not know, in certain other activities like aviation and boating, they’re the go-to default equipment supplier because their stuff just plain works. You don’t have to worry about the quality of the product!

I’d suggest you go to Garmin.com/Catalyst for more info, and definitely check out their videos on YouTube, as they’re super-helpful in learning more about what the Catalyst can and cannot do, as well as how to use it.

Okay, I know this probably sounds a bit like an advertisement for the Garmin Catalyst, and if it does, there’s a reason. And that reason is that I believe in it. I’ve made a habit of not endorsing anything unless it’s something that I use.

Thanks for the question. Keep learning and having fun on track!