Q: Does the friction circle change with more speed? Do I have less grip at higher speeds than I do at lower speeds? 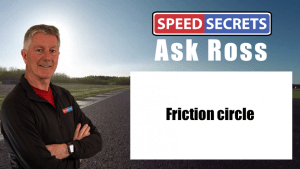 Q: “I’ve been pondering why it is that I get higher g-forces at moderate speeds vs lower g-forces at higher speeds. Taking data off my AiM Solo, at Road Atlanta, I can consistently pull 1.3 G at 68 mph at turn 6 in my E30. And I can also consistently pull 1.1 G at 96 mph coming into the apex of turn 12. But I have never approached the 1.3 Gs coming into the apex at 12. I’m wondering if the friction circle gets smaller as speed rises? Or does my courage just shrink? Or is the friction circle really a cone when differing speeds are considered? Maybe at high speeds the individual molecules of rubber have less time to adhere to the track, so their grip is less? And if we stack the different friction circles from different speed up on top of each other, we see a friction cone?”

A: First, you’re right that the friction circle is not a circle. Because cars don’t accelerate as fast as they brake and corner, the bottom of the graph (the acceleration part) is flattened. And since some tires generate more cornering grip than braking, the upper part of the circle might be flattened a little bit; other tires generate more braking grip than cornering grip, so the sides of the graph would be flattened a little. So, the circle is never a circle.

I like your way of envisioning the Friction Circle in 3-D, as it does change at different speeds. For example, the longitudinal g-loads from acceleration will be less (and therefore, that part of the Friction Circle will “shrink”), since your car doesn’t accelerate at the same rate from higher speed.

You’re also right that speed can change the shape, but not really for the reason you thought. Instead, it could have more to do with aerodynamic downforce, and in this case, the faster you go, the more g-force the car will generate. So, faster corners should generate higher g loads/numbers.

Why are you not seeing the same g-loads in turns 6 and 12 – in fact, it’s the opposite? There are two reasons that immediately come to mind:

You’re right that we could think of the friction circle as a cone, or, at least, a 3D model. But it’s mostly due to aerodynamics, and not in the way the tire interacts with the track.

If your car has aerodynamic downforce (from a splitter, wing and/or spoiler), then you should expect to generate more g’s in Turn 12 than Turn 6. But if your car generates only a little bit of downforce, then I can see it generating more grip from the banking in Turn 6. It is possible that a car generates lift – the opposite of downforce – which would result in having less grip and g-load capabilities in faster corners.