Q: How can a driver out-brake another on the outside of a corner like Lewis Hamilton tried on Max Verstappen in the Brazilian Grand Prix? 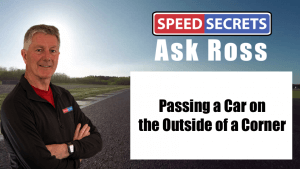 Q: “Here’s my conundrum. As a theoretical proposition, how is it possible to make an outside pass (I’m thinking of Lewis’ attempt in Brazil when Max pushed him off track)? In this example, it is assumed that these are perfect drivers who are absolutely at the limit. If Car A is ahead of Car B and takes the correct line through the turn – it seems to me that it should be impossible for Car B to pass Car A. Since Car B will be, by definition, off line, his maximum speed must be less than Car A’s. Thus, he can’t pass Car A. Or is it that outside passes are an attempt to freak out Driver A, and provoke him into a mistake? Or make Car A slow down?”

A: This is one of those questions that is easiest to answer with diagrams, but let me see what I can do to explain it here.

If Car A is passing Car B on the outside of a corner, yes, generally Car B (on the inside) is going to have the advantage – in the corner. In the case of Max and Lewis in Brazil, Max (we’ll call Car B) was braking on the inside, off the ideal braking line. He also was not on the ideal line once they turned into the corner, as he now had a tighter radius to drive. Lewis/Car A was braking on the ideal line, so sometimes that can provide an advantage, especially because, in this case, he had the advantage of a higher speed (due to DRS and Mercedes power) approaching the brake zone (which probably had better grip because it was on line). So, he was actually hoping/planning to execute the pass mostly before the corner, taking advantage of the higher speed entering the brake zone, and being able to carry more speed into the corner because he wasn’t on a tighter line.

I think, what Lewis/Car A didn’t plan for was Max/Car B braking later than him, even though he was on a part of the track that probably had slightly less grip, and would be leading to a tighter radius corner. What Max/Car B was hoping/planning to do was take “advantage” of his lower top speed entering the brake zone, and brake later than Lewis/Car A, getting his car to the apex prior to him, which puts him in the position of controlling the corner. That mostly worked for Max/Car B!

My read on what happened (and no, I didn’t spend hours pouring over the video and data, but I did watch the video a few times) is that Max/Car B got his braking so late that he struggled to get his car right to the apex, and to avoid locking up he had to modulate the brakes which resulted in him running wider than he would have preferred. Of course, with a car on the outside at that point in time, that meant that Lewis/Car A had to also run wide to avoid contact. And the controversy began!!!

Does this answer your question? If it’s specific to the Lewis/Max situation, maybe it does. If you’re looking for a broader answer regarding whether a car passing on the outside can ever make it work, then not so much.

Ahhh, then you bring up the idea that an outside pass might “freak out” another driver. That’s certainly possible. At the level of F1 drivers, not much freaks them out, but at lower levels, that can be a factor.

And one more factor to consider: some cars, and some drivers are just a bit better at feeling the limits in the brake zone. In other words, given the exact same car, some drivers will be able to brake in a shorter distance than another driver, which means they could begin braking slightly later. And that might give them the edge, whether on the outside or inside.