Q: How can I tell whether I have my brake bias set correctly? 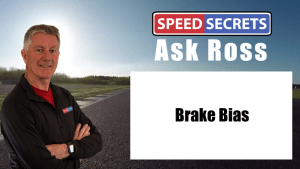 Q: “How can I tell (while driving and with data) that I have the brake bias set correctly?”

A: Some of what I say here might be obvious or stuff you already know, but…

The goal is to have both front and rear tires lock up at the same time when you apply too much brake pressure. If you have too much front brake bias, the fronts will lock up before the rear, and vice versa.

When driving, if you lock up a front tire, the steering will feel a bit numb, it will pull to either side, or the steering input will not make a change to the direction (you can turn the steering wheel, but the car will not go in that direction). Think about one or both of the front tires locked up and skidding – it will impact your steering control.

When driving, if you lock up a rear tire, the rear of the car will feel unstable (you may have to use some steering corrections to keep the car pointing straight). At the extreme, the rear will kick out to the side so much that you spin.

As you drive, test out which tires lock up first by braking too hard – then adjust some bias away from that end of the car (i.e., if the fronts lock up first, adjust the bias towards the rear; if you had 55% bias to the front, adjust so you have 54.5% to the front).

Unless the bias is way off, think about adjustments in half a percent, then test again.

When looking at data, look for downward spikes of the speed trace in the brake zones. You can’t tell whether it was a front or rear locking up first unless you have separate front and rear wheel speed data traces. If you do have front and rear wheel speed traces, ideally, you’d see a quick downward spike in the trace that matched both; if not, you can only tell that you had a lock-up, but not know whether it was front or rear. If you have separate speed traces, note which end of the car locked up, and adjust bias to the opposite end.

Adjusting brake bias is a trial-and-error thing. You have to experiment by braking too hard, noticing which end of the car locked up, then adjust from there. Of course, too much locking up and you’re going to flat spot and ruin your tires, so you have to be sensitive enough to note the slightest of lock-up to learn from it, but ease off the pedal to avoid a big lock-up.