Q: How do I improve my corner entry speed when driving on a racetrack? 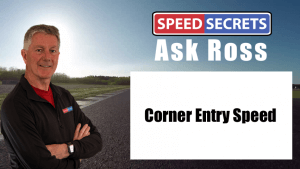 Q: “How do I improve my corner entry speed?”

A: There’s a difference between anticipating and expecting something to happen, and often corner entry speed is dictated by our expectations – we expect the car to do something that we don’t like or want! It’s okay to anticipate that happening, but if you expect it to happen, you’re likely to over-slow for the corner.

It sounds like there’s a fine line between anticipating and expecting, but it’s important to know – and use – this difference. Picture Helio Castroneves turning into Turn 1 at Indianapolis Motor Speedway. If he expects that his car is going to understeer just after the initial turn-in, he’s going to ease out of the throttle just slightly. But he doesn’t do that. Instead, he turns in and then deals with what the car is doing. Sure, in the back of his mind, he knows that it’s possible that his car will understeer, so he’s ready in case it does. But he doesn’t lift – he turns in flat, senses what the car is doing, and makes adjustments, if needed.

Okay, you might not be asking about Turn 1 at Indy, but same thing applies to any and all corners. The fastest drivers know what’s possible for the car to do after the initial turn-in, but they don’t expect it.

That’s the answer to your question from a mental game perspective, so now let’s look at it from the driving-technique side.

What slows you down and makes your corner entry speed too slow? Brakes! So, begin by braking lighter. Yes, I know, driving fast is all about braking late and hard for corners, right? Not always. In fact, less often than you might think.

As you approach a corner that you want to increase entry speed for, first look into the corner, for the End-of-Braking (EoB). It’s not some exact spot, but it’s usually beyond the turn-in point, somewhere between there and the apex. By looking into the area, you’re planning ahead. (Remember, the EoB is no different from approaching a red light on a highway; you don’t focus on where you’re going to begin braking, but instead you focus on where you need to be stopped, and you manage your braking from that end point).

Begin braking (your BoB, Begin-of-Braking) where you usually do. But this time, brake slightly lighter. If you used a “9” pedal (a “10” is maximum braking, or threshold braking) in the past, use a “8” pedal this time. As you get to the turn-in point, begin to slowly and deliberately release the brakes with the intention of carrying just one or two MPH more entry speed. You can anticipate that the car might do something – likely understeer a bit – but you don’t have to expect it. With this approach to using slightly lighter braking, looking further into the corner towards the EoB, and being smooth with the brake release, your car will have more grip than in the past when you had it standing up on its nose from all the hard braking. With the car more balanced, it’ll have more overall grip, and you’re likely to find that the extra speed is easy to manage. In fact, it may tell you that you could carry even more speed on the next lap. If so, take the same approach: use a “7” pedal, look into the EoB, release the brakes smoothly as you turn in.

At some point, you will reach the limit and begin to carry too much speed into the corner. How do you know? First, if your entry speed causes you to delay getting back to throttle exiting the corner, you probably went too far. If you’re carrying so much entry speed that it’s hard to get the car to turn towards the apex, you may be entering too fast; or you may just have to change the timing and rate of release of the brakes to help you rotate the car.

Ultimately, once your corner entry speed is up and fine-tuned, you may want to compress your brake zone – move your BoB in a car length or two, and brake harder (take it up one level, from a “7” to a “8,” or “8 to a “9”). By doing so, you extend the length of the straightaway a little, and keep your corner entry speed up. However, you may find that this approach is not as fast as braking a little lighter because the car is not as well balanced. Try it and see.

Again, it’s okay to anticipate and be prepared for what the car might do, but don’t expect it. Drive it into the corner and learn what it does, then manage it in a calm manner.