Q: How do I improve my corner minimum speed? 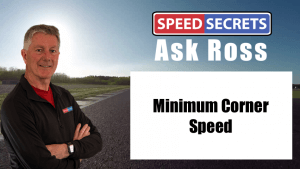 Q: “I have a question not about corner entry speed but rather about MID-corner speed (minimum corner speed). A friend of mine and I compare lots of data when we go to DE’s. He drives a nearly stock 987 Cayman S, is a pretty good driver, and runs tires he can get 30 track days out of. I drive a 718 Spyder with quite a bit of negative camber, Michelin Cup 2s, and have to replace tires every 6-10 track days — fronts more frequently than rears. I feel more comfortable with the car moving around than my friend does, and very comfortably trail brake as needed to balance/rotate the car. I have more grip, more power, and I do turn faster laps, BUT… his mid-corner speeds (or minimum speed in the corner) are sometimes equal to mine! That shouldn’t be the case. What am I doing wrong? Am I just being a wimp? Or does it go deeper than that? I generally brake VERY hard and VERY late and do a lot of trail braking (I go through brakes faster than anyone else I know). Is that part of the problem? Am I overworking my front tires? I record and analyze my tire temps after every session and pay attention to which end of the car I’m ‘overworking’ (determined by tire temps). Throughout any given day, I tend to transition from overworking the fronts to overworking the rears — it’s not significant in either direction, but that’s my trend. Can you help figure out if I’m being too cautious, or if I’m doing something else wrong?”

A: Interesting question! I’ll write as I think about this, and just give you some points to consider:

Okay, that should get you thinking and give you something to work with.