Q: How do I know if I’m driving at my limit, or the limit of the car? 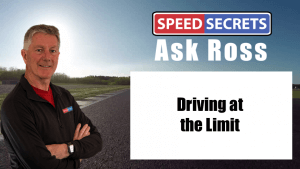 Q: “I seem to be pushing the limits NOT OF THE CAR, but my driving abilities lately as I try to improve my lap times. I have been improving my personal best times, but with less differential as I progress. I feel as I am pushing harder for that tenth of a second because I am stuck where I am driving-wise. I don’t feel as smooth and seem to be taking bigger risks. You mentioned in a chalktalk that if you saw a driver’s hands steady and smooth, he probably wasn’t at the limit because he wasn’t adjusting. I have been working on a hard initial brake at BoB (Begin-of-Braking) and smooth release to EoB (End-of-Braking). I am comfortable with sliding the car, but I find sometimes I am punishing the front tires trail braking hard into corner and weight is on front left in a right-hand turn. So where do I go from here to improve and not be frustrated with my driving? My lap times have improved with later, harder braking and carrying more speed through the corners.”

A: The first thing that came to mind when you asked about how to improve, along with the thought of “punishing the front tires,” is this: it sounds like you might be simply asking too much of them, and that’s the weak link in the chain right now – that’s what’s holding you back from going to the next level.

When you enter these corners, what is it that makes you feel as if you’re punishing the front tires? Is it some understeer? If so, what are you doing with the steering at that instant?

Many drivers, when experiencing understeer, keep the same amount of steering input in, or even add more – they turn the wheel a little more. After all, the car is not turning as much as you want, so it’s human nature to turn the wheel more in the attempt to make the car change direction more. But that does punish the front tires, and only makes the problem worse. Instead, you should straighten the steering wheel a tiny bit – just enough for the front tires to regain grip. If you hold the steering wheel at the same angle, you’re going to scrub the front tires, scrubbing off speed, and beating up on the tires (so the next corner will be even worse).

Be aware of your steering angle. As an exercise, think about every angle of steering you put in over the course of a single lap. Imagine adding up all those angles, in both directions (but not subtracting when you unwind/straighten the wheel or turn the opposite direction). Let’s say that you turned the steering wheel a total of 750 degrees over the course of one lap. Next time you go on track, aim to turn the wheel only 700 degrees; then, 675 for the following session. The idea is to keep the steering wheel pointing straight ahead more often. If you can do that, I’m sure you’ll be faster.

Your point about driving to your own personal limits, but not the car’s is an interesting one. The question becomes, “How do you know if you’re at your limit, or the car’s?” I believe a driver must be able to over-drive a car before they can consistently drive it at its limit, so that might be one way of determining whether it’s the car’s or driver’s limit. If you can over-drive a car – meaning that you can fairly consistently drive it beyond its limit, to the point where that’s actually slower than if you eased off a tiny bit (in which case you’d go faster). If, every time you push to get a little more out of the car, it takes it and you go faster, then you’re not driving to the car’s limit.