Q: How do I reduce the amount of “chatter” I get with the tires while cornering? 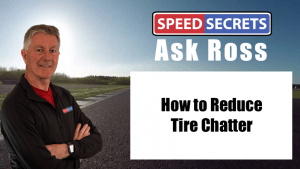 Q: “I have a question for you – it’s about the ‘tire chatter’ I experience a fair amount of at Sebring. It’s most notable at Turn 7, and to a lesser extent at Turns 5 and 10. Other drivers have described this as me needing to reduce corner speed a bit, as well as not ‘throwing the car in there quite so aggressively,’ but I was wondering if you had other ideas. My setup is that I run a Ford Focus ST with some engine and suspension mods, and Maxxis Victra RC-1 tires. In experimenting on Turn 5 a bit I found that if I relaxed my hands a bit at the apex and let the car run out a bit more to track out, that I could reduce the amount of chatter, but the chatter is still there. I don’t see too much opportunity to do that sort of an adjustment at Turn 7.”

A: I’m going to assume the chatter you’re experiencing is coming from the front tires, and that would indicate to me that you’re experiencing some amount of understeer. When you say that relaxing your hands helps reduce this, that definitely sounds like you have some amount of understeer, and relaxing your hands results in unwinding/straightening the steering wheel just a little bit.

With that in mind, there are a couple of things to do. First, continue relaxing your hands, and unwinding the steering wheel slightly immediately when you have this chatter feeling and sound. What’s actually happening here is that you have the front tires turned at an angle that is slightly beyond the ideal slip angle, and by straightening the steering a bit, it reduces that angle – to an angle where the tires are working as they’re designed to, and not at an extreme angle to the track. At that point in the corner, you definitely have some amount of understeer – even if you can’t necessarily feel it much. Understeer is when the car doesn’t turn as much as you’d like, or it “under-steers” – not steering around the corner as much as you want. So, the natural instinct for every driver is to turn the steering even more, but all that does is put the tire at too extreme an angle to grip the track the way it was meant to. As an extreme example, think of the front tires at a 90-degree angle to the direction your car is traveling – now that would cause some chattering, right?!!

Again, the instant you sense this chatter, straighten the steering wheel a tiny bit – even just a couple of degrees of rotation.

As you’ve already found out, any time that you can “open your hands,” “let the car run free,” “relax your hands,” or “unwind the wheel” exiting these corners – using more track, right out to the edge of the track – it’ll reduce the understeer chatter, and you’ll be faster coming off the corners.

The other factor that contributes to this type of chatter is speed. Yes, those who gave you the advice to slow your corner entry down are right. Now, I’m not talking about slowing down by 10 MPH! But just one or two MPH – maybe three or four if you’re really overdriving the entry – will make a huge difference. Yes, you can enter a corner with too much speed, but that’s not helping if it leads to too much understeer, and especially when that leads to having to delay getting back to power exiting a corner.

Turns 5, 7 and 10 at Sebring are similar, and it doesn’t surprise me that you have some understeer chatter in them. They’re easy corners to overdrive the entry on, so a little patience goes a long way to getting a better exit off of them – which will lead to a faster lap time.