Q: How hard should I be braking for a corner on a race track? What about trail braking? 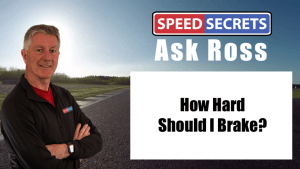 ‘Can we agree that the optimal braking model would be to threshold brake up to the point where you have just enough time to settle the car before turning in? (If not, why not?) IF we can agree on that, then what determines when to stop threshold braking are factors like the length of the brake zone and how much speed you are carrying. If the brake zone is short, then what you/Ross are proposing seems like it makes more sense. If the brake zone is long, it seems like that would have you getting off of maximum braking much earlier than required to settle the car.’

He wants to take trail braking out of the equation, as “it complicates things” in his words. I don’t have any data to substantiate the 2/3rds in the first 1/3rd. Is there another way of explaining it? Please help.”

A: First, the “2/3rds – 1/3rd“ thing is a conceptual way of trying to get drivers to get most of their braking done early, so they can fine-tune speed and load transfer at turn-in, rather than arrive at that point with their hair on fire and there being no room for adjustment. In my experience, many drivers don’t get enough of their braking done early enough, so they arrive at the turn-in point with so much speed they have no choice but hang on the brakes. That either over-slows the car or unbalances the car enough that corner entry speed is hurt.

In this way, I think your instructor is saying a similar thing – get most of your braking done early in the brake zone.

Second, brake zones cannot be thought of from BoB (Begin of Braking) to the turn-in point, leaving out any amount of trail braking to the EoB (End of Braking). That’s kinda like saying, “Let’s not consider any of the corner from the apex out to the exit point because it complicates things.” The brake zone is from the BoB to the EoB.

Perhaps the reason your instructor is struggling with this is because he’s not considering the entire brake zone. Or because he’s taking it too literal. The idea is to get as much of the braking done before some point prior to the turn-in point (yes, this is usually further into the brake zone than 2/3rds, but again, what I’m saying is meant to get drivers to brake harder in the beginning of the brake zone), and then have the ability to fine-tune speed and load transfer in the last little bit before the turn-in and all the way to the EoB. I think when he says “settle,” he may be saying the same thing – that you need to get the bulk of your braking done early enough that you can fine-tune your speed and not have the car standing on its nose from super-hard braking when you’re turning in.

One thing that I should note here – that has nothing really with answering your question, but is important – is that not all brake zones require or reward threshold braking. The “optimal braking model” is not necessarily using threshold braking. In fact, there may be an “optimal” for one corner, but that “optimal” is different for almost every corner. For example, Turn 1 at Sebring, Mid-Ohio, Road Atlanta, Road America, Mosport (Canadian Tire Motorsport Park), Thunderhill, and other tracks with high-speed corners do not reward threshold braking. Why? Because the corners are fast, the brake zone is short, and it’s better to have the car better balanced (less load transfer on the front) when you arrive at the turn-in point. Rarely can a driver threshold brake and then quickly get off the brakes in a short brake zone without having the car un-settled. A better compromise is to brake a bit lighter than threshold to keep the car balanced. In this case, an early brush of the brakes is better than late threshold braking. In slower, tighter corners where you need help to rotate the car (change direction), it’s good to have more load on the front as you turn in.

Hey, if all corners required the exact same thing, driving on a track would be boring!