Q: I seem to hit a plateau with my lap times – how do I push beyond that and go even faster? 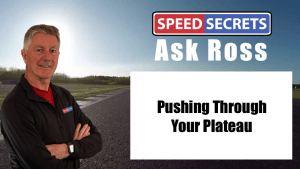 Q: “In sim racing I can work with the data & video and get to about 1% of the ‘best VRS lap’ in about 3 sessions of disciplined practice. Then, I’m stalled for the rest of the week. I use the same data/video process, race and practice a bunch of laps, but don’t really make any lap time progress. I stall at the 1%. In real life racing during the last two years I’ve struggled with my qualifying where I race better than I qualify. I’ll be P1 through first half of session… go back and forth in top 3 in the next few laps… and then often get bumped back to P4 or 5 in the last few minutes of the session. I stay in the same lap time range and my competitors put in a late flyer. Any wisdom to share?”

A: Immediately after reading this paragraph, close your eyes and imagine being in a pack of cars, on the pace lap, heading towards the green flag for the start of a race. Go ahead and do this for a minute or so – DO NOT READ ANY FURTHER UNTIL YOU HAVE DONE THIS.

I’ll wait for you to finish….

Okay, now that you’re back from imagining the start of the race, where were you in the pack at the start? What position? Pole? Outside pole? 5th? 3rd? 8th?

I’d really like to know where you imagined yourself on the pace lap, because that is a good indication of what your belief system says about your qualifying pace. It’s rare that we out-qualify what we believe we’re capable of, so this is an interesting simple exercise to get an insight into what you truly believe deep down inside.

If, for example, you imagined yourself lined up at the start in 3rd place, then it’s less likely that you’ll qualify on pole because what you believe, deep down inside, says that you should be 3rd. That’s the first step… figuring out what your belief system has to say. If you saw yourself on pole, then we can eliminate your belief system as being the main hurdle. If you saw yourself on the grid in any position other than that, it’s a factor. It might not be a big a factor, but it’s something to spend some focus on, reprogramming your beliefs by using mental imagery.

Okay, so let’s assume you saw yourself on pole. Then, the priority is something else. The next thing to really keep in mind is the fact that you get up to speed quickly, and that’s why you’re P1 early in the session – you’re better at getting to speed than your competitors. That’s a strength of yours, and something you need to keep in mind because it’s good for your belief system and state of mind. You know you can be faster than everyone else, because you’ve proved it early in the sessions.

As you know, many drivers race better than they qualify, and there are reasons for that. It could be that chasing other cars keep you focused on the act of driving, rather than what your lap time is. Sometimes, if you’re overly-focused on your lap times in qualifying, you don’t perform as well; if you just focus on making each lap a little bit faster – knowing that there is no limit – you’ll keep chipping away at the times, and they’ll continue to improve. Maybe not every lap, but as a trend. It could be that you get to a certain lap time and think, “That’s good enough.” This is probably not a conscious thought, but something in your subconscious. If you remove the lap time, and focus strictly on making small, incremental improvements in your driving, often the lap times continue to get faster.

When qualifying for a sim race, turn off lap times. Ignore them, keep the mindset that you want to improve every lap, and you might find that your times do improve. I like to keep in mind that my car is getting lighter and lighter every lap, and therefore it’s faster every lap – if I turn the same lap time, that means I’ve actually gotten slower. Unless the tires are overheated or degraded, your car should be faster every lap. If not, then you might be too focused on the lap times, and not enough on your own performance.

It’s counter-intuitive, in a way… when you focus on your lap times (the result), you often tighten up, sense the car less (even in a sim), and perform worse, resulting in a slower lap time; when you focus simply on the act of driving and what it takes to drive faster, you perform better, and the result is the result you’re after – a faster lap time. Could your focus be too much on the result?

Some drivers have a comfort zone with how much the car moves around (again, even on a sim, especially if it’s programmed from lots of time on the real track), and when they get to that level, they stay there. That level or comfort zone might be good enough for 3rd or 5th, but not the pole. To find that last couple of tenths, you might have to push your comfort zone, and have the car move around more – for your driving to feel a bit messy, accepting that you might make a few more mistakes (or “learning-takes” as I like to think of them). Could it be that you’re not willing to push your comfort zone? Could it be that you have this mental model of how you should drive, and that does not include ever making any mistakes? Could it be that you need to spend time on your sim “getting messy” – over-driving the car a bit, making some mistakes, bouncing over curbs, dropping wheels on the exit, having a few lockups under braking… and correcting for them, messing up the lap, but learning that you can get away with it? Doing that will improve your car control skills, build your confidence in your ability to correct for mistakes, and gradually push your comfort zone.

In terms of a specific driving technique that could be holding you back from those last tenths, I don’t know without seeing data and/or video. But do you know? If there was an area of your driving technique that you think might have a slight opportunity for improvement – that would lead to a gain in a tenth or two – what would it be? And remember, sometimes you only need a few hundredths of a second in a couple of places on a track, and that will add up to a gain in lap time of a few tenths of a second.