Q: I’m faster when chasing another car – why and how can I be fast when not following another driver? 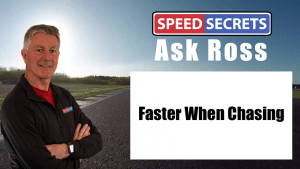 Q: “Why am I faster when I’m chasing another car in a race than I am by myself?”

A: Certainly, one of the reasons for being faster when chasing another car is that you have a reference. When you’re driving by yourself, and you approach a corner, what tells you when to brake, how much to slow down to, and what speed to carry through the corner? It’s a combination of your senses and your memory – what you’ve done on previous laps.

But when you’re following another driver, you can view it and react to what they’re doing.

For some drivers, it’s a competitive thing. Chasing another driver means you’re on the hunt, whereas driving by yourself is relatively pointless. And leading? Well, here’s pressure that comes with that, and for many drivers, that leads to tensing up, resulting in less feeling of what the car needs to drive fast.

The best drivers focus on themselves and their own driving, rather than what others are doing. In other words, they focus on their own references, how to apply and release the brakes, their own line, their own acceleration. And they do this whether there is another car in front of them or not. That makes them consistent.

The more you trigger and use your “chase” program, the better you’ll get at using it. It builds momentum.

Of course, your belief in yourself also plays a role in this. If you believe you don’t drive fast unless you’re chasing another car, then that’s like to be true. If you believe that you’re fast whether there’s another car in front of you or not, you’re more likely to be fast.

Oh, I almost forgot the most important reason you may be faster when following another car: The leading car is magnetic so it’s drawing you closer and closer to it! 🙂