Q: Is the turn-in point over-emphasized, and just how important is it? 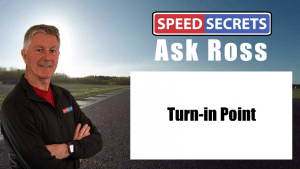 Q: “I had a thought about the discussion on turn-in points, especially as I’m considering moving up to instructor in my local DE organizations. I understand that a consistent turn-in is an important concept for novices, but I wonder if we spend too much time thinking about it as people progress through the spectrum. We focus on looking ahead, focusing on apex and End-of-Braking (explicitly not the turn-in point in most cases), and feeling the car. As I’ve progressed through DE to wheel-to-wheel competition, I notice that turn-in is one of the first things to ‘sacrifice’ to make sure that, on this lap in these conditions the car is oriented thus at the apex. I’ve also noticed that many even advanced DE (and slower racers) seem to have learned how to drive a particular ‘track recipe’ really, really well but struggle when things get a little weird (greasy tires, wet track, traffic, etc.). Just as we move from straight line braking to trail braking, should we be de-emphasizing turn-in as something to expect to be consistent? Or, am I missing something more fundamental? I’d love to hear your thoughts on this.”

A: I agree with you. You talk about the “track recipe” and I do think too many drivers drive in a formulaic way, instead of seeing the big picture. Hey, most start off by connecting the dots, from one cone to another without understanding why that is the line through a corner. I’ve asked a driver on occasion why they drive the line that they do, and with a slightly confused face, they reply, “Because that’s the line my instructor told me to drive.”

Of course, we do need to build a foundation before moving on to bigger and better things, but you have a great point. Maybe it’s not so much de-emphasizing the turn-in, but rather emphasizing why it is where it is, and why it needs to change at times. The typical reference points – usually marked by cones – seem to be set in stone by too many instructors (who may not fully understand why they’re where they are, themselves).

It sounds to me that you’re already a better instructor than many because you’re thinking about stuff like this. While our goal should be to start with the basics and build from there, all along the way there should be an additional goal of helping students understand the bigger picture, especially why we do what we do.