Q: Should drivers “point-by” other cars when racing wheel to wheel? 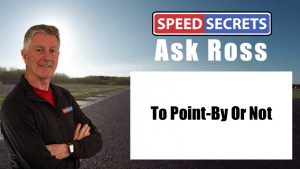 Q: “During a race, should ‘point-bys’ be used to help with an overtake?”

A: A point-by will help both drivers – the passer and passee – so, yes. If you’re coming up to pass me during a race, and I’ve determined that it’s not worth defending or making it as hard as possible for you to pass me, then it’s in my best interest to give you a point-by. When being passed, I want to lose as little time as possible, so if I point you by – and maybe give me throttle a very slight breathe/ease to make it easy for you to get by me – that’ll make the pass better for me, and for you.

If you’re passing me, and you see my point-by, there’s less decision-making needed, less hesitation, and you’ll clear me with both of us losing the least amount of time. It’s also safer for both of us.

Now, let me stress one more thing: the driver being passed must be predictable, and that almost always means staying on the usual line. Again, if you’re coming up to pass me, and I move to the opposite side of the track to “make room” for you, you’re not expecting that. Far too many crashes have happened because the driver being passed moved at the last moment to make room for a passing car. Be predictable – stay on your line.

You may be asking why F1 and Indy car drivers don’t give point-bys. First, in most modern open-wheel cars, it’s somewhere between difficult and impossible to get one’s hand up high enough that a following driver would be able to see above the rear wing. Second, in most cases, drivers are competing for positions, so there is no “I’ll point you by because we’re not racing.” Point-bys are used more often in racing where there are mixed classes and bigger variances between cars.