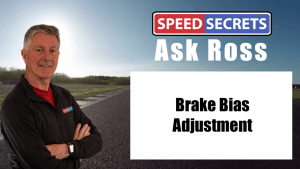 Q: “I am having trouble with brake bias adjustment. During a stint, are you supposed to advance the bias toward the front or toward the rear?”

A: There is no one-way-to-do-it answer to that question. In some cars, you never have to change it during a race. In other cars, because of the way the car’s balance changes during a race (due to fuel load burning off – because of where the fuel tank is located in the chassis – or tire wear), you may have to make small adjustments either toward the front or the rear. The key is to be aware of whether you’re getting any lock up, and if so, which end of the car is it happening at. If you’re getting a touch of front tire lock up, then make a small adjustment towards the rear; and vice versa.

If, while braking hard for a corner, the steering feels numb, like it wouldn’t change the direction of the car if you turned the wheel, then the front tires are on the verge of locking up, or are locked up. Also, if the car suddenly pulls to one side or the other under braking, the front tires are locking up – the difference in track surface/camber/elevation from one side of the car to the other is causing it to pull to one side. In this case, adjust some bias toward the rear. If, on the other hand, the rear of the car feels like it’s wiggling, and the car immediately goes toward some oversteer when entering a corner – it makes you feel nervous turning in – the rear tires are on the verge or beginning to lock up. In that case, put more bias toward the front.

You can sometimes make a big improvement in your consistent lap times by tuning brake bias. But you can also get yourself mixed up easily if you make too big a change without being sure what it is you want. And what you want is more important than anything – it’s being sensitive to what you and the car need. Ideally, you want all four tires to lock up at the exact same time if you brake too hard. If you make some changes to the bias, I recommend going back to the baseline setup every now and then as a check to make sure what you’ve done is actually helping.