Q: Should I always brake as late and hard as I can for every corner? Is there ever a reason for braking lighter? 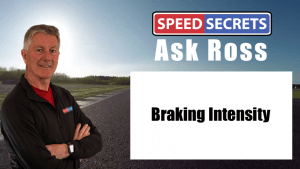 A: That depends on how you define the “limit.” Strictly from a maximum braking perspective, yes, if you’re braking lighter, then you’re not at the very limit of what your car and tires can do. And if the goal was to be the fastest from the BoB (Begin-of-Braking) to the corner entry or EoB (End-of-Braking), then you would be slower if you braked lighter.

But the goal is to be fastest through the entire section from the BoB for a corner to the beginning of the next section and ultimately, the complete lap. And sometimes, braking lighter makes you faster in the long run. Why?

Never forget that a car that is better balanced – meaning there is the least amount of load transfer, and the chassis is as flat as possible – has more traction than one that is standing up on its nose from very heavy braking. So, when you brake hard, your car has less overall traction than if you braked lighter (because you won’t have caused as much load transfer. For a simple explanation of this, watch the Why Smooth is Fast video on my YouTube channel).

This is why sometimes – and I mean sometimes, and not always – by braking a little bit lighter, you can turn a faster lap time. And keep in mind that when I say lighter, I don’t mean very light. It’s relative. If maximum threshold braking is a “10 out of “10,” then lighter might be a “9” or “8” pedal.

Typically – again, not always – lighter braking works when approaching fast corners, and harder braking works in slower corners where the highest priority is getting the car slowed, turned, and rotated to accelerate hard out of the corner. In fast corners, often the priority is maintaining speed as opposed to re-accelerating after slowing down a lot. So, maximizing grip is what you’re after, which means keeping the car well-balanced.

Hey, if you braked with the same pressure – maximum pressure – and released the brakes in the same way for every corner, driving would be boring!