Q: What does “In a spin, both feet in” mean, and does it apply to PDK and semi-automatic cars? 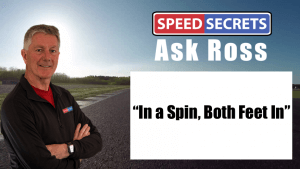 Q: “’In a spin, both feet in.’ But what about if you are in a traditional automatic, or a PDK-type car? I assume the reason for de-clutching a manual is (a) to allow the rear tires to spin freely, forward or backward, thus letting the car spin as it wants to in a consistent manner without the engine drag; (b) to avoid damage to the engine spinning backwards. Are those the reasons? A PDK-car, being a clutch car would have the same (a) and (b) problems, right? But the driver can’t easily or quickly de-clutch. And a traditional liquid-based automatic? Any thoughts – particularly because dual-clutch are becoming more and more popular for track cars?”

A: You’re right about the reason for “both feet in” with a manual. The goal is have the spinning car stay in as small an area as possible, and especially not roll back across the track in front of other cars. Depressing the clutch and standing on the brake pedal will help with that, and therefore, “both feet in.”

The only difference with a PDK or auto transmission car is that there is no need for the second foot to go “in,” since there is no clutch pedal to push. So, the advice is more like “In a spin, one foot in.” In this case, “In a spin, stand on the brake pedal.” (That doesn’t rhyme as well, though!)

The other update to “In a spin, both feet in” advice is that it was originally coined before ABS was invented. As I said, one of the main reasons for standing on the brake pedal is to keep the car in as small an area as possible, and not have it roll back across the track in front of other cars. Locking up the brakes would usually be the best way of doing that. But with ABS, the brakes don’t lock up – since the objective of ABS is to allow you to continue steering while at max braking, standing on the brakes with ABS may not control the car from rolling back across the track like it would if you didn’t have ABS. Still, I think that maximum braking once you’ve begun spinning is better than not being at max braking – most of the time. Not all the time, but most of the time.