Q: What separates the champions from all other drivers? What tip would you give a driver to be a tenth of a second faster? 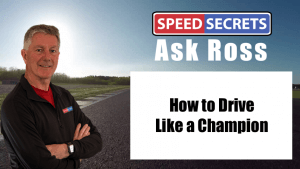 Q: “I’m ‘studying’ about the art of racing, mostly karting. What actually separates a champion from the rest of the field? You’ve said that what separates drivers is the release of the brakes. In karting, I see a lot of drivers brake in a straight line, turn in (with brake pedal) and move to the throttle. So, if I’m right, the best drivers brake in a straight line but at the turn in point they do not release the brake pedal but slowly release pressure on the brakes. How would a karting champion handle this transition? Racing is about fine-tuning your driving style, but what is perfect driving? You see drivers so close in lap-time, but what tip would you give someone to be a tenth faster than everybody else?”

A: The simple answer is the importance of the brake release is equal in cars and karts. Yes, the best drivers trail/ease off the brakes while turning into most corners. Not all corners, but most, and especially corners that require changing the direction of the car/kart a lot.

What tip would I give a driver looking for a tenth or two of a second? That depends on the level of the driver, but at the intermediate to highest levels, most often the timing and rate of release of the brakes will make the biggest difference. It’ll make the difference to the corner entry speed, the line the car/kart is directed on, and then how early the driver can get back to full throttle.

Having said that, if the other basics of driving technique are not good enough, the brake release will not be as important. It’s all about finding the weakest link in the chain, and brake release may not be it if the driver has other things to work on. But it’ll never hurt to focus on smoother and better-timed brake releases.