Q: What’s going on with the way Fernando Alonso turns the steering wheel so aggressively? 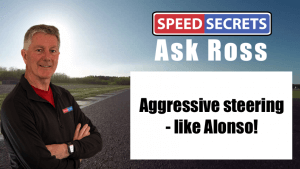 Q: “I read or heard somewhere that Fernando Alonso initiates his turns with somewhat of a “jerk” on the wheel. I’ve actually seen a video of him doing just this IN THE RAIN!!! (Probably is a holdover from his karting days). So, I’m wondering: what happens at the contact patch when steering is applied during the first few rotations of the tire? The springs and sway bars haven’t yet been fully activated and the dampers are just starting their movements. Is there a momentary increase in grip at the rubber-pavement interface? What’s going on in that instant time frame? Does Alonso know something? Or am I chasing unicorns here?”

A:  I’ve read the same thing – that Alonso is very abrupt with his turn-in. I’ve also noticed it when watching his in-car camera. This certainly goes against what Rob Wilson teaches – Alonso does not “tell his tires what he’s going to do,” he just does it and demands his tires follow along!! This takes a huge amount of confidence, which is something that Alonso has no shortage of. I’d be surprised if you put another driver in Alonso’s car that they wouldn’t complain that it oversteers – I think Alonso initiates a little understeer with the abrupt turn-in, and that balances the car’s natural oversteer balance. It’s that technique which I talk about for being fast in the rain – initiate some slide so you know what you’ve got, so you don’t have to react to it.

At the same time, I think his abrupt turn-in does make the front tires work harder, and it’s only because of his great skill for sensing the tires that he’s able to make them last at the same time. It would be really interesting to see his steering trace compared to some other drivers. I wonder if his total amount of steering angle is slightly less, even though it’s more abrupt at the beginning? Does he ask a lot of the tires at first, but then is very gentle with them after that?

This is one of those questions that we cannot answer without more data! But it is fun to think about it.

But back to your question: what’s going on at the contact patch of the tire/track interface? My understanding of tires and vehicle dynamics is that when you (or Alonso) initially turn the steering wheel, the tire twists, as the wheel is what moves first. In those first few rotations of the tire/wheel immediately after you’ve turned into a corner, the wheel is pointed on the angle that you’ve initiated by turning the steering wheel, but the tire is lagging behind in angle slightly. It’s this twisting of the tire (so that it’s not quite on the same turned angle that the rotating wheel is) that is the slip angle.

Imagine taking a rubber eraser and pushing it down on a table, then twisting it. That “contact patch” of the eraser stays in the same position relative to the table, and yet the part you’re holding with your fingers is pointing in a slightly different angle due to the twisting action. It’s the same kind of thing with the tires. The challenging part of getting a mental picture of this is that the tire/wheel is rotating at the same time (unlike our rubber eraser).

Despite what Alonso is capable of doing, if you gently increase the steering angle, the front tires will continue to grip the track surface for longer than if you “shock” the contact patch with a sudden turn of the steering wheel. There are countless numbers of superstar athletes who do things that go against what is “right,” and yet they make them work, and I’d suggest that the way Alonso turns the steering wheel into many corners is one of those exceptions to the rule.