Q: What’s the difference between the “school line” and the “racing line? 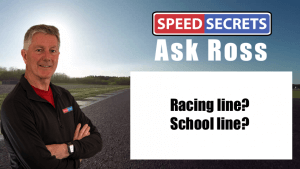 Q: “I often hear instructors talk about the “school line” versus the “racing line.” What’s the difference, and which should I drive?”

A: There shouldn’t be much, if any, difference between the two lines. In fact, I dislike the use of the terms “school” and “racing” lines. There are some instructors who believe there is a difference, and that it’s a big difference. I disagree.

Some High Performance Driver Education (HPDE) schools will deliberately insist on students driving lines through corners with an artificially late turn-in and apex. The thinking is that it’s safer because the driver will not run out of room at the exit of the corner and drive off the track. It’s not safer.

To turn in later for a corner, to get to a later apex, do you have to turn the steering wheel more to drive a tighter radius early in the corner? Yes! Do you have more or less control of your car when your steering is turned a lot? Less, right? So, by having students drive their “school line,” they’ve actually increased the risk of a spin or loss of control early in the corner.

Here’s the worst part of this: Teaching someone the wrong thing (the artificially late turn-in and apex), only to teach them the right thing later (when the instructors think the student is “ready” to learn the right thing) is a terrible thing to do to a person. Imagine teaching kindergarten kids to call any and all animals “dogs,” with the thinking that they’re not ready to learn the right names for them. Ridiculous, right? So, why some schools teach drivers the wrong things for a while, and then have to correct those things later is beyond me. I know they believe it’s safer, but it’s not. How do I know? Because I’ve instructed tens of thousands of drivers on the track, and there was a time when I used the artificially late turn-in, thinking I was doing the right thing. I wasn’t, as I learned through experience.

The second part of this question is based on the perception that many HPDE instructors have about what they think is the “racing line.” They believe that racers move towards the inside and turn in early for most corners to block someone from passing them. Because many HPDE instructors have never raced, they don’t consider the fact that the best way to keep a competitor behind them is not to block them. The best way is to drive the fastest line, so they’re faster than their competitors. That means driving the line that results in the fastest laps. And guess what? That line is also the safest.

Hopefully I’ve answered your question is a way that you’ve come to the realization that the “school” and “racing” lines should be the same, or very, very close. If there’s any variation, it has more to do with what one driver has learned that works for them in their car, compared to someone else. Even then, the difference is very subtle.

Having said that, drive the line that your instructors suggest. If you want, you can suggest they read this post, but the best way to ruin your day at the track is by getting into a big argument with the instructors and even organizers. If they’re suggesting cornering lines with artificially late turn-ins and apexes, understand what they’re doing, go along with it, use it as a learning experience, and know that there is a difference between dogs and cats! J