Q: When and where should I upshift my Porsche Cayman going up the Esses at Watkins Glen? 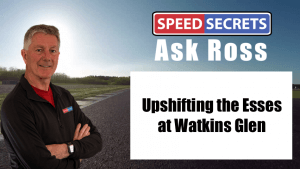 Q: “I recently started racing my Cayman S at Watkins Glen and I’m hooked! I bought your Virtual Track Walk and my dad gave me your book. You talk about upshifting into turn two at Watkins as you enter the Esses and when I have entered, I’m in third. My thought is I want higher RPMs for theelevation change, usually shifting into fourth after turn 3. Is my thinking wrong here? Do I want to be in fourth through the Esses?”

Yes, ideally you want to upshift at the optimum RPM for acceleration. But sometimes you’re better off to short-shift to avoid having to lift in the middle of a corner if you’re stretching the upshift to maximum RPM.

Also, as you’ve discovered, the Esses at the Glen have what are almost like steps. The steepness changes as you go up the hill, with short sections that are not as steep. In some cars, it’s beneficial to upshift on these “plateaus,” even if it means short-shifting slightly as you’ll lose less speed when you go through the process of shifting.

Yes, it depends! On your car’s gearing, when you need to upshift, and how comfortable you are when shifting and cornering.