Q: When heel & toe downshifting, what’s the right timing for the blip of the throttle? 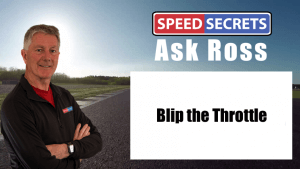 Q: “When you describe heel and toe downshifting in your books and your eCourses, you mention these steps:

“The thing I am confused about is that shouldn’t you blip the throttle as you downshift, not after? That way it goes into gear smoother?”

A: The most common error I see drivers make when heel & toe downshifting is blipping the throttle so soon that by the time they let the clutch out, the revs have dropped too low to make a smooth downshift. When learning to heel & toe, if you blip the throttle immediately after moving the shifter, you’ll get into the habit of leaving the revving of the engine to just before releasing the clutch; over time, with practice, the whole process speeds up and the blip will be almost at the same time as the movement of the shifter, and it’ll be smooth. Again, it’ll become one synchronized motion, with practice.

The revving of the engine has little to no effect on helping the gear engage smoother. That’s what the synchros in the transmission are for! The reason for the blip is to match the revs of the engine with the driving wheels, so you don’t get an abrupt engine-braking deceleration that upsets the balance of the car.