Q: When looking at in-car video, how do I determine where the actual turn-in begins? 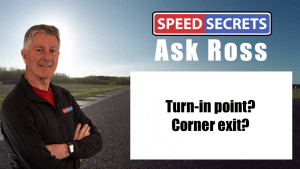 Q: “Looking at my in-car video in quarter-speed, I’m trying to define what is the turn-in point and where is the corner exit, both in relation to sampling the speed at those two points. Turn-in really isn’t the slowest point of the corner – that will likely be closer to the apex. Is the turn-in the point where the lateral G starts to shift away from 0? Or past a threshold, 50% of peak? Likewise for corner exit, and finding the corner exit speed, is it the point where lateral G returns to near 0? These seem like logical guidelines and I think could yield repeatable results. I think ultimately my exercise is to see what my acceleration is from turn-in to apex and from apex to corner exit. Was I still slowing between turn-in and apex? Was I already accelerating, meaning I over-slowed? Was I still decelerating after the apex? Can I find some patterns where that all important corner-exit speeds are high given some correlation with the above?”

You’re right that the turn-in point is rarely the slowest part of the corner, as you are usually easing off the brake while turning in (some amount of trail braking). The slowest point is usually somewhere between the turn-in and the apex. Comparing where the “min speed point” is can be very helpful. Sometimes I’ll compare two drivers with the exact same min speed, but they’re in different places. If exit speed is most important (which it’s not sometimes), then an earlier min speed is good. But again, this is not always the case, as sometimes a later min speed works because you’ve been able to carry so much speed.

Doing what you’re doing will be a great learning experience. Turning the learning into action is the key! Identifying the most important things to work on is critical, and with the analysis you’re doing, you should be able to figure out the priorities.