Q: Which corners should I use trail braking in, and which shouldn’t I? 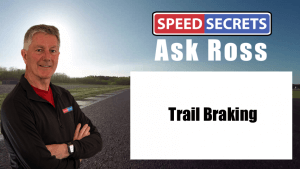 Q: “Which kind of corner requires more or less trail braking? Or is that always car dependent?”

Slow, tight radius corners are the ones that require lots of change in direction, right? A 180-degree hairpin is a great example: you often approach from a relatively high speed, have to brake a lot to slow down, and then need to get the car rotated/turned before you can begin accelerating. This is a perfect corner for trail braking.

Fast, large radius corners don’t require as much – or any – trail braking because you don’t need to get your car to change direction as much. Instead, what’s most important is that you keep your car as well-balanced as possible because that leads to it having the most traction (the less load transfer you cause, the more traction your car has).

So, the radius of the corner is a major factor in how much trail braking you will typically use, but so does how much you want to use the load transfer to help turn the car.

In tight corners, you want load on the front tires and less on the rear so the car will turn more easily. Yes, the load transfer results in less overall traction for your car (see Why Smooth is Fast video for an explanation), but you should be willing to trade that off for helping to rotate the car so itʻs pointing out of the corner and you can begin accelerating early. In large radius corners, you don’t want to give up that overall grip level; instead, you’d rather have the car as close to perfectly-balanced as possible so you can carry as much speed through the corner – it’s less about changing direction, and more about maintaining the high speed.

Of course, there are always exceptions to these guidelines, but they’re rare. And these guidelines apply equally to all cars. Yes, some cars require more or less trail braking than other cars, but the guideline in terms of what types of corners will follow the same trend.