Q: Which reference points are the most important when approaching & driving through race track corners? 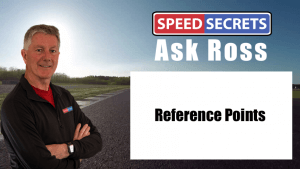 Q: “I’m doing my yearly brush-up on the basics and realized that I’m thinking more about the start of throttle rather than the End-of-Braking. Pretty close in terms of where and when in the corner, but not quite! I also think about the point of full throttle to make sure I don’t get there too soon (or too late!). How do these three points rate in terms of importance? And if a driver gets one wrong, which one has the highest cost in terms of lap time? Which one can be compromised with the least penalty?”when

A: Wow, this is an interesting question!

You mention three different “points” that reference to the beginning or ending of a specific driving technique: End-of-Braking (EoB), begin-of-throttle, and full-throttle. As I read your question, you’re asking me to rank these three in priority order, in terms of which has the biggest influence on lap time (good or bad).

Before I do that, I want to congratulate you on having more than the usual three: Turn-in, Apex, and Exit. The more references you have, the better, as it means you’ll be more consistently accurate with your driving.

I’m going to “cheat” a bit with my answer. On the approach and the entry to corners, EoB is most important – and it’s more important than BoB (Begin-on-Braking, which I realize you’re not asking about). And on the exit of the corner, the full-throttle point is usually the most important.

So, I’ve taken the opposite approach, and said that the point where you initially tip into the throttle is usually the least important. In most cases, where you begin to apply the throttle doesn’t impact your corner exit speed as much as when you get to full throttle – and stay at full throttle.