Q: How does endurance racing work? 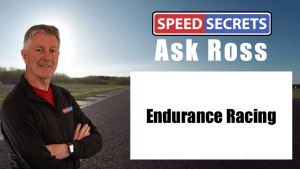 Q: “How does endurance racing work?”

A: Whether you’re asking about the 24-hours of Le Mans or Daytona, the Sebring 12-Hour, or any of the “low budget” endurance series (World Racing League, American Endurance Racing, ChampCar, LeMons, Lucky Dog) races, the winner is the car that completes the most distance in the designated time. Endurance races tend to be at least 6 hours in length, although some amateur race series will have shorter ones than that.

There’s the famous (or should that be “infamous”) incident when Ford finished 1-2-3 at Le Mans in 1966, as depicted in the Ford v Ferrari movie. It’s a true story. To make a great public relations photo, the Ford team arranged for their three cars to line up in formation as they crossed the finish line at the end of the 24 hours, with the leading car just slightly ahead of the other two. But, since this leading car, driven by Ken Miles, had started further up the field than the other two, that meant that the car that crossed the line in second had actually traveled more distance than the leading car. The Ken Milesleading car ended up classified in second placeThe way that rule is now interpreted is different, and generally it’s the leading car at the end of the designated time that is declared the winner

Since the races are so long, each team is made up of multiple drivers, usually two, three or four (some events will allow more drivers than that). Each driver drives a “stint,” then comes in for a pit stop (when regular fueling and possibly tires changes are required), and hands the car off to the next driver. These driver changes can take as little as 10-15 seconds for one driver to get unbuckled from the safety harnesses/seat belts, unplug a radio cord and cool shirt, climb out of the car, and the next driver to get in, buckled and plugged in. It’s a well-rehearsed routine.

Since the races are so long, pit stops are critical, and the amount of time spent refueling and changing tires can make or break a victory. Endurance races are even more about teamwork than sprint races.

For more information about how to improve your chances of winning endurance races, as a driver or team, download my free Endurance Racing Guide eBook.