Q: In endurance racing, when is it best to make it difficult for a faster car to pass, and when should our fastest driver be in the car? 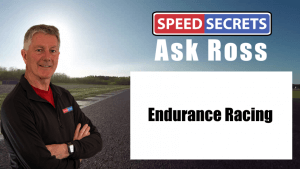 Q: “I’ve read through your endurance racing eBook several times and it’s awesome. It’s a topic where there’s not a whole lot of information out there on. I have a couple of questions I was hoping I could pick your brain about. First, I completely agree it’s easier to let faster traffic by because you lose less time to the rest of your competitors. One question I have on that is sometimes we compete in rather small fields of around 20 cars for between 3-5 hours. We are not usually the fastest car based on lap time, but we do make up quite a bit of time based on pit strategy and time spent in the pits. Should we try to make it difficult on the faster cars to pass us? Not necessarily blocking anyone, but also not pointing them by. My second question is about when we should use our faster driver. We typically only use two drivers, with one being 3-5 seconds faster than the other one per lap. Do you want the faster driver to start the race and try to move up the pack as far as possible, or do you want the faster driver in when the pack is more spread out towards the end of the race? This one’s a bit of a head-scratcher for me. Any knowledge you have on these topics would be greatly appreciated.”

A: Great but tough questions because there isn’t a yes or no answer to either of them. And yes, if you’re an endurance racer, download my free Endurance Racing Guide eBook here.

Should you let a faster car by? If you could predict “I will lose less time if I do ____ (let by or hold up)” then that decision would be easy, right? Of course, in the heat of the battle, it’s not easy to compare the options and always come up with the right solution. But I find that if a driver focuses on that single question at all times (what’s going to lose me the least amount of time?), then you’ll make the best decision most often.

The factors you have to weigh up are more than just where you’re fast compared to the faster car. You want to know where that other car is faster than you (straights, corners, braking). You want to factor in track conditions (if you let the faster car by, will that put you on a line that has a lot of marbles?). As an example, a faster car is on your bumper as you get to a brake zone. If you know they’re better on brakes, let them go. If they’re better on acceleration and top speed, maybe you want to hustle into the corner, and then let them by coming out of the corner. Obviously, this takes a lot of brain bandwidth, so if a driver is already near the mental limit, let the faster car go and not risk a mistake.

It also depends on where you are in the race, how much time is left, what position you’re in, where are your main competitors, and what you’re racing for. If it’s early in the race, you might want to let the faster car go, but if it’s getting down to the last part of the race and you’re fighting for a position, then you might be “harder” to pass. There are many, many factors, and that’s what makes racecraft so much fun.

When to have your faster driver in the car? Another question with no absolute yes or no answer. How many stints is each driver doing? How is each driver’s consistency and ability to perform for long stints? Is the faster driver also good in traffic, or just when they have clear track? Which driver handles pressure better?

Some drivers are better at racecraft, even though their pace is slower (the difference between lap times when on a clear track versus when in traffic; some might lose a second on average in traffic, and another driver might lose 1.5 to 2 seconds a lap in traffic, so the “slower” driver might be better to start if they lose less time in traffic; or the other way around). Do you expect to have a fight on your hands with a competitor at the end of the race, in which case you probably want your fastest driver in the car then. Some drivers are just better at starts, and others are not, even if they can drive a faster pace. I’d suggest weighing up all these factors. One can make a case for starting your fastest driver to get as big a gap on competitors, and another case for having your fastest driver at the end in case you’re battling down to the last lap with a competitor.

Sorry I can’t give you a “always do this” type of answer. But hopefully when you think through the factors I’ve mentioned here (and maybe others I’ve missed because I don’t know the details of your series, races, car, drivers), the answers will become more obvious.