Speed Secret: If you’re not just slightly beyond the limit every now and then, it’s likely you’re not driving the limit.

Driving the limit is all about honing in on it, driving slightly below it, over it, under it, over it… and finally reducing the amount you’re over and under it until you’re at the limit. It’s all about tuning the oscillation. 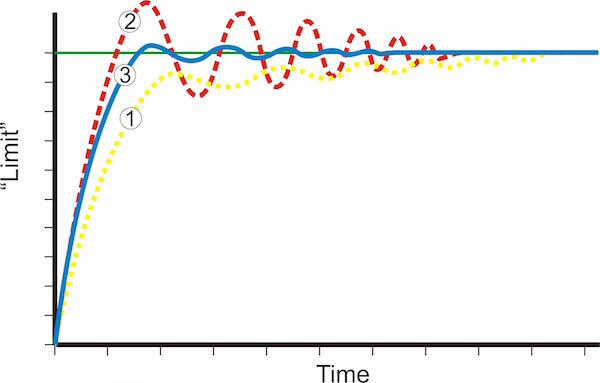 In the illustration to the right, the limit is represented by the green horizontal line, while the other lines represent how close three different drivers are to it.

Driver #3, represented by the blue line starts by going over the limit a little, dialing it back a little, then over, under, and eventually hones in on consistently driving the limit.

Many drivers are so focused on driving the right line, where their braking points are, what RPM to shift at, and various other specifics, that they don’t focus enough on sensing the limits of the car.

Listen to the tires and the wind noise. Note how the g-forces build up and then begin to taper off; feel the chassis pitch and roll. Look far ahead so that changes in rotation of the car are more noticeable.

The tires and your car are telling you whether you’re driving the limit. Are you paying attention?

In this video Quick Tip I talk about what it’s like being slightly beyond the limit – being Comfortable Being Uncomfortable.