Getting There – Part 2 (Racing Road Trips) 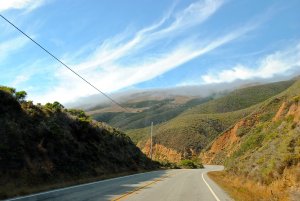 When I talk about cross-country road trips, I’m talking about trips where the objective is to get from here to there in the shortest time, not the kind where you meander around the country looking for something to do. I know very little about this second type of trip, other than the people who do them piss me off with their speed (or lack thereof), and their seemingly carefree and clueless changes of direction. It’s like they don’t have a purpose or mission. Don’t they know that the sole purpose of a cross-country trip is to get there as soon as possible, unload, go racing, load back up, and drive home again?

All of this leads to what I call the Montana-Texas Theory, which is closely related to Einstein’s Theory of Relativity. Albert’s theory refers to how time is not a constant, but relative to space. My Montana-Texas theory is very similar, and can be stated as such:

The length of time it takes to drive from one point to another is directly proportional to the variety of scenery along the way.

As proof of my theory, let’s compare northern California’s legendary Highway 1 with just about any section of Interstate 90 through Montana, particularly the eastern part of the state. Driving a hundred miles of Highway 1 takes almost two hours, most of that spent exclaiming, “Oh, wow! Look at that! That’s so beautiful!” Now, take I-90 in Montana. One hundred miles of this interstate takes at least four days to drive, and not once would you say, “Oh, look at that field—it’s just like that other field we passed two days ago.”

Yes, boredom does play a significant factor in my driving pleasure. My theory can also be stated as a mathematical formula: T = (D x B)/S, where T stands for the relative time it takes to drive from one point to another, D is the distance in miles, B is the level of boredom one feels, and S is the amount of scenery along the way.

Would you be surprised if I told you that I came up with this theory, the name for it, the mathematical equation, and everything that goes with it while driving across Montana?

Okay, no more math in this story, but Part 3 will be posted here next week.