On the way home from the 1982 Formula Atlantic race at Mid-Ohio, sometime around midnight, somewhere in Indiana, and nowhere near anything but a dark highway, I was driving in the right lane of Interstate 80 when I felt The Truck begin to wiggle. Within seconds, and in less time than I could run through my mental database of possible problems that could make a truck feel this way, it bounced up, then down. And I mean UP, and then DOWN. The kind of down that would go with not having any left rear wheels.

At sixty miles per hour, with our little tent-trailer home hanging on for dear life behind us, the truck began to skid sideways. Gord, who had been sleeping, awoke with a start as the truck bounced and slid wildly across our lanes. With its nose pointing toward the cornfield on the right side of the highway, I counter-steered, got it slowed down, and somewhat safely pulled us off to the interstate shoulder.

I gingerly stepped out of the truck and looked around. The left rear wheels—both, as it had a dually rear axle—were gone. Gone, as in no longer attached to the truck axle, and absolutely nowhere to be seen. The truck now listed to its left rear side, like a toy plastic horse with a leg broken off. And it was pitch-dark outside.

Upon closer inspection with a flashlight, Gord and I saw that all ten studs holding the wheels on the axle had sheared right off. Even if we had had spare wheels, we couldn’t have put them on since there was nothing to bolt them on with. What to do?

“I’ll go find the wheels,” Gord said. Yeah, right. And find me a bag of gold in that field over there while you’re at it. It’s after midnight and there’s not a light in sight for miles. 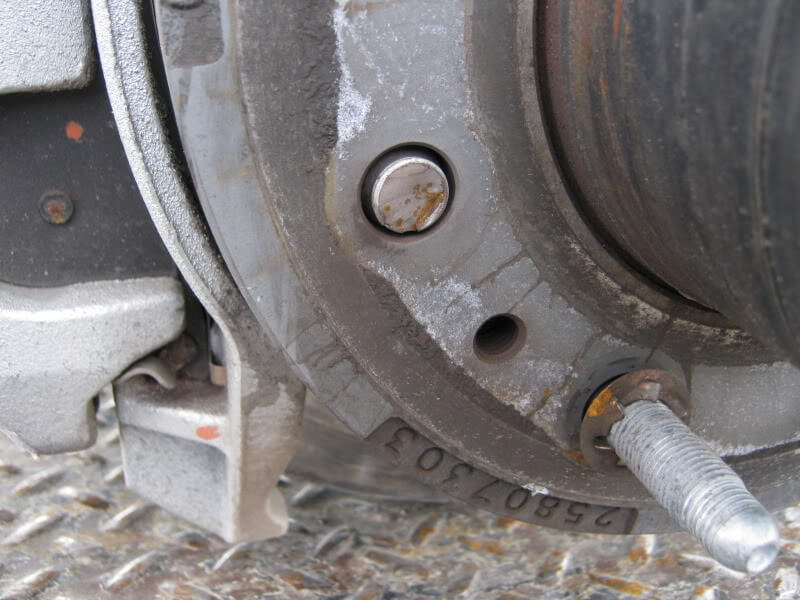 I crouched down and examined the axle where the wheels were once attached. It didn’t take a Formula One mechanic to see that we were going to need some serious help. Scanning in every direction, I couldn’t see a single light that didn’t belong to some vehicle on the highway, and this in a part of the country where it’s so flat that one can watch his dog run away for three days. I couldn’t help but feel utter helplessness and hopelessness beginning to set in. What had started out as a hopeful racing season was definitely turning for the worse.

I got out the jack and lifted up the axle to get a better view. I was mentally running though the options of how we could fix this and where I was going to get the money when Gord returned. He was wheeling both tires! He had backtracked a quarter mile or so and actually found both wheels, one of them having veered off into a cornfield.

How the hell did you find them, I thought. And get this—he was also carrying five of the broken wheel studs. Gord is like that—incredibly observant and always able to find the proverbial needle in the haystack. I even felt a little appreciation for him—at least as much as one can allow for a younger brother. But what he thought we were going to do with those bent and broken studs, I’ll never know.

We decided there wasn’t much we could do in the dark. I figured the most likely solution to our problem was to hitch a ride into the nearest town and have a tow truck come get us, but that would have to wait until daylight. We agreed to try to sleep in the cab of the truck until the sun came up. We also thought that sleeping in The Tent-Trailer would not be a good idea—if a trucker dozed off while driving, we’d end up being a huge air bag for the crash.

Trying to snooze in the cab of a truck parked on the side of an interstate, with its left side about six inches from the line separating the shoulder from the roadway, is a challenge. Especially if it has only three wheels, the fourth corner is propped up on a jack, and semi-trailer trucks are whizzing by every minute or two, causing the entire truck to shake.

Somewhere around 5:30 in the morning, through half-closed eyes, I glanced in the side mirror to check if the next sleepy truck driver was going to veer into our wounded bedroom-on-three-wheels and instantly kill us. Instead I saw a police car sidling up. Ah, the state patrol to the rescue. That only took five hours.

I got out of the truck, walked to the back, and met the officer. After explaining our dilemma, I asked if he could call a tow truck for us. He did, and promptly drove off.

It was light now, so Gord and I were able to take a closer look at things. We pulled out our toolbox and got to work, our backsides sticking out into the lane of traffic on the interstate. As we pulled the wheel hub apart, we realized that the only problem was the ten missing and broken wheel studs. If we could get new ones, we could install them right here and replace the wheels.

About this time a tow truck showed up. It was a good thing we didn’t need to be towed now, because this was just a regular tow truck, not one that could lift something our size. I asked the driver if he could go back into town and get us ten new studs, and off he went. A couple of hours later, he returned with the goods. I paid him with my fading wad of cash, and we reassembled everything. By 10 am or so, we were back on the road, just like new.

Well, almost like new. You see, when the two wheels came off, they had gotten caught for a fraction of a second under the step-up bar at the back of the truck. That’s what had caused the truck to leap into the air. And when the truck performed its best leaping-antelope imitation, one of the tires got a pretty good-sized cut in it. It was holding air, but it had definitely seen better days.

Could this trip get any worse? Maybe it gets better? Come back next week for the next installment.