Racecraft: Be Assertive, Not Aggressive – A Key To Winning Races

Speed Secret: Be assertive, not aggressive. 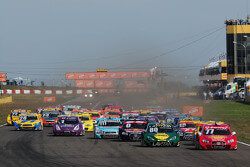 It’s more than a matter of semantics. There’s a difference between assertive driving and aggressive driving.

“Assertive” is controlled aggression. “Aggressive” is uncontrolled. Which do you want to be? Can you think of examples of drivers who were aggressive, when they should have been assertive?

I strongly encourage race drivers to envision themselves in a variety of scenarios on the track – race starts, defending a pass, setting up and making a pass, battling on the last lap, and so on – and seeing themselves being assertive. You can think of that as controlled aggression, but it’s deliberate, well thought out, planned, smart, decisive, and controlled.