The Pros & Cons of Left-Foot-Braking

I often get asked about left-foot braking, so I’ll present what I see as this technique’s pros and cons. 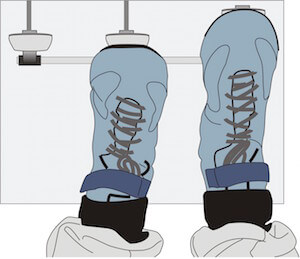 So, what does this mean to you?

A good right-foot braker will beat a mediocre left-foot braker. Dario Franchitti, a right-foot braker, is proof of this. So is Johannes van Overbeek. I’ve had the opportunity to look at Johannes’ data from driving the Extreme Speed/Patron LMP2 car all this year, and I’m convinced he’s one of the best right-foot brakers ever. I would never have known that he brakes with his right foot from the data. With most right-foot brakers, you can see the tiny gap in time between when the right foot comes off the throttle and before it applies the brake pedal. But Johannes is able to do this so fast that it’s practically impossible to see it in the data.

Here’s the big problem: Many drivers left-foot brake because they think they can gain an advantage (or they think it makes them cool), but because they’re less-than-good at it (but don’t realize it), they would be better off right-foot braking. If these drivers had asked me, I’d have said that they needed a good reason to left-foot brake in anything other than purpose-built race cars with a sequential gearbox (and in that case, they should have learned it yesterday!).

Of course, many cars don’t allow you to left-foot brake, because you have to use the clutch. But some drivers will switch their left foot back and forth between the clutch and brake, and many times that leads to disaster. I recommend keeping things simple, which means staying away from switching back and forth during a lap. I realize that some drivers are very good at this (I suspect I’ll hear from a few!), but I wouldn’t be surprised that if they put that much focus into other areas of their driving, they’d be even faster .

Remember, a good right-foot braker will beat a mediocre left-foot braker, and unless you can practice left-foot braking a lot – and I mean a lot – it’s hard to get beyond the mediocre level (if you’re honest with yourself). Again, you use your right foot all the time on the throttle, so it becomes extremely sensitive. But given the opportunity to practice it, and a car that rewards, even encourages it, left-foot braking is the way to go.

Throughout most of my racing career I right-foot braked, because the cars I drove either required or encouraged the use of the clutch. When I got the opportunity to drive a car where left- foot braking was an option and an advantage (a prototype sports car), I was fortunate enough to have an entire day doing aerodynamic testing where I could focus 100% on developing my timing and sensitivity with my left foot. Since that day, I’ve been able to switch back and forth, depending on the car. And there are times when I’m faster right-foot braking, and times when I’m faster left-foot braking.

Note that some drivers, like Johannes and Dario, have resisted the change, not because they’re stubborn or couldn’t handle it. No, the reason they stuck with right-foot braking is they’re really good at it; it allowed them to focus, and excel, on other parts of their driving. Left-foot braking is not a silver bullet that will automatically make you super-fast.

So, should you left-foot brake? Think about what I’ve just said and make a decision based on these two questions:

Will you be faster? Do you want to learn a new technique?

I know there are some drivers who will argue with what I’ve said here, so listen to what they have to say, as well.

Better yet, ask left-foot braker, Scott Dixon, and right-foot braker, Dario Franchitti, to tell you which is best. Maybe you can encourage them to argue their case against each other!