Q. As an HPDE instructor, should I tell my student about faster cars approaching from behind? 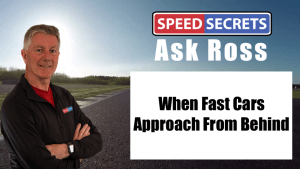 Q: “I was recently told by the head driving instructor trainer for a national organization that I, as an instructor, should never tell a new student that a car was approaching us from behind because, “The student could turn their head around to look at the car behind us and run off the track,” while demonstrating what ‘could happen’ by holding an imaginary wheel and turning the wheel while turning his head around. What are your thoughts on this?”

A: First, after over four decades of in-car instruction, I’ve never seen a driver turn their head around to look for a car that I gave them a heads-up about. I’m not saying it’s not possible, but I would say it’s extremely rare, if ever. Usually, if I mention there’s a faster car behind them, the driver checks the mirror (not a bad thing), ignores what I said because their mind is overloaded, or – in the rare occasion – they drift in the direction of where that faster car is. It’s up to me, as the instructor, to be prepared for these reactions (or non-reactions!) and provide additional instruction, if necessary.

Having said that, there’s some reason the trainer told you this. Did they have a student do this to them? That would be a great question to ask the trainer.

Certainly, where a driver’s head is pointed is mostly where they’re going to turn the steering wheel – the hands follow the eyes (which are installed in the head!).

As an instructor, one of the most important things you must do is decide what level of mental capacity the student/driver has at all times. Your goal is to stretch it, but not go way over it. And part of your instruction should be to help build the student’s awareness level. To balance their mental capacity with building their awareness, you have to decide whether it’s best to tell the student about a car approaching from the rear (helping them become more aware), or keeping that information to yourself (limiting brain overload) and managing it yourself.

If you don’t tell the student, and the car behind moves to make a pass, surprising the student, that could be far worse than not telling them. Ideally, you would give a message like, “Car approaching from the rear – keep your eyes up and look ahead. I’ll let you know if you need to do anything – be predictable and stay on your line. Drive your car.” Obviously, the fewer the words you use, the better, so this needs to be adapted to the situation. So, you could simply say, “Look ahead – know that there is a car approaching from behind. Stay on line.” Giving the student a heads up, while helping them stay focused on what’s ahead will address the rare situation where a driver turns their head too much.

Of the thousands and thousands (literally, I’ve probably been right-seat-instructing with 10,000-plus students in the past 40 or so years), I’ve never seen a driver turn their head so much that it became a problem… unless I wasn’t paying attention. Sure, I’ve had to remind students to keep looking where they want to go (while pointing with my finger), but that’s about all. If all you did was tell the student, “Hey, there’s a fast car approaching from behind, getting ready to pass on your right,” and then just sat there… that could be a problem. If you give them a heads up, be prepared to counter any incorrect actions with another verbal and physical command.

In addition, a part of your role as instructor is to help students learn to use their mirrors, so encouraging them to give a quick glance is a good thing. And yes, there are some novices that are so focused on just getting around the track that you need to tell them that you’ll monitor the mirrors and tell them what to do if another car is approaching to pass. Again, you have to decide what their level of ability is, and how much they can mentally tackle.

What do you think? What’s been your experience, as a driver and instructor?