Q: Do different tires require different amounts of sliding to get the most out of them? 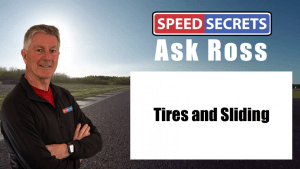 Q: “I wonder how much braking or braking transition points have to do with the changes in tires. Back in the ’50s, Stirling Moss was much faster than anyone else (except Fangio), and he ascribed it to what we now call trail braking. Apparently, back then with the skinny bias-ply tires and harder rubber, most everybody was pretty much getting their braking done before asking their tires to turn in. In any case, that’s the unique (back then anyway) technique to which Moss ascribed most of his faster driving to. He claimed to typically brake about a third of the way through the turn. During Jimmy Clark’s time, the F1 tires were only half as wide and soft as they are today. So, I wonder if techniques have evolved with the tires? And does it vary with the type of car. My Vette gets less than 1.25 g cornering, and I run tires more like the ’60s F1 tire’s width and compound than what F1s do today.”

A: For sure, driving technique does change depending on the tire. The biggest difference was when race tires switched from bias-ply to radials, because bias-ply tires generated maximum grip with a greater slip angle. That’s why cars used to slide around a lot more back then. But even today there is a big difference – well, differences. Maybe they’re hard to see, but they’re there. For example, when IMSA prototype cars switched from Continental to Michelin tires a couple of years ago, drivers and teams had to adapt. The Continental tire didn’t like to do more than one thing at a time – it liked to brake, corner, then accelerate, but not blend them together much. So, drivers trail braked less with them than they do with the Michelin, which likes to do more than one thing at a time.

Some will say that with more aero downforce, the cars don’t slide as much, so there is a difference in driving technique. I don’t really agree. The fastest drivers will slide an aero car just as much as a non-aero car – it’s just much faster. And that takes big you-know-whats (confidence)!